Well, it’s over. 50,053 words in 30 days. The noise you hear is the sound of my heading hitting the desk in exhaustion. I don’t think even in college did I dare to make such a mad dash to the writing finish line for something.

I know that what I’ve written is hardly pristine, and probably barely readable in places, but it is finished—and that was the goal. If nothing else, it also moved “Wild Angels” from a concept and collection of notes to something more real.

As I mentioned in my previous post, the story and theme took some interesting turns during the past week. Yesterday, after I firmly told the Internal (or is that Infernal?) Editor to shut the hell up, my muse decided it was time to cut loose and expose other parts of my psyche. (Have I mentioned that she’s big on writing as therapy?) I suppose it’s my own fault because I consciously chose to set up a particular character situation, but she’s the one who decided to run with it. (When all else fails, blame the muse! 😀 ) 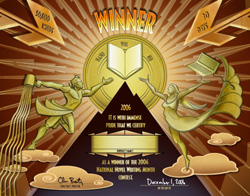 NaNoWriMo 2018 Report: Hindsight Rather Than Foresight