Yes, it’s done. The story itself is not yet finished–far from it, in fact. But November has come to close and, with it, NaNoWriMo 2007.

This year was in many ways a similar experience to last year, and in some ways quite different. In looking back at last year’s reports, I see the same complaints of difficulties with the muse during approximately the same periods. This year, though, I knew better than to believe that I could start slow and catch up later. With a specific daily goal, and a strong goad of discipline, this year was a much more satisfying experience. I spent less time worrying over how much I’d fallen behind my needed word count (which I never did this year) and more about the progression of the story.

[For those of you interested in the statistics: To reach the 50,000-word mark requires an average of 1,667 words/day. I set a personal goal of 1,700 words/day to give myself a very small buffer. Had I maintained that, I would have reached 50,000 words on the 29th–only one day early. My average was slightly more than 1,800 words/day. What a difference an extra 100 words make!)

I believe this year’s story is much more structured than last year’s effort. Although I had to do some literary tap-dancing a bit here and there, it generally adheres to the overall structure I set out for it. I do recognize that there are gaps that I need to fill in order to complete the overall story, but I think that as it is, it works (or will work, when completed) as a sufficiently self-contained story.

It’s nice to know that I can learn from my mistakes. 🙂 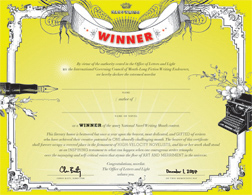