The others books done by Herbert and Anderson in this series have ranged from irritating to quite good. (I found their conclusion of the original Dune series in Sandworms of Dune to be almost as satisfying a conclusion as the last Harry Potter book.) I’m anticipating that it will be at least a moderately diverting read and I look forward to seeing how the events between Dune and Dune Messiah are explained.

What I’m Listening to Now: Majipoor Chronicles by Robert Silverberg 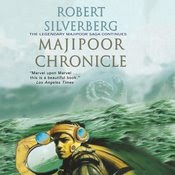 Yes, still. And I need to finish it before NaNoWriMo begins on November 1st. I’m currently working at page 216 of 259. There’s a sizable scene coming out that I am likely to cut entirely. There are a lot fewer gaps to fill in now, so completing by the end of the month. How long will it be when this draft is done? Ummm . . . a lot longer than it should be?

New Book Release: “The Last Speck of the World”